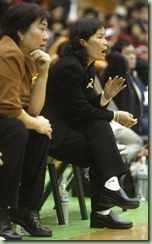 Taiwan basketball -- the CTBA -- has a bad reputation keeping stats and records. Anyway, I believe without a doubt that Hong is the winningest women's basketball head coach in Taiwanese basketball history.

Which means Hong is a natural choice to lead the women's NT every year. However, newspapers reported the following day that Hong was hesitant about taking the job as she wanted to focus on rebuilding Cathay Life's aging roster for the remainder of the year.

The 2009 Asian Women's Championship will be the qualifier for the 2010 FIBA World Championship. Top three teams in Asia are expected to earn places in the Worlds. It will not be easy for Taiwan to do that though, especially after Taiwan was stripped of the rights to host the Asian Championship earlier this month.

FIBA Asia has not announced the host country yet.

A circulating rumor said that FIBA Asia did not take away Taiwan's right to host the game. Instead, it was the CTBA who decided to give up the hosting rights, fearing that it would lose money by hosting the championship. CTBA denied the rumor.