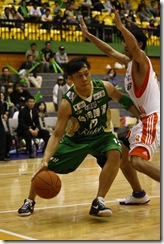 BOW GOES TO LIN
Taiwan Beer forward Lin Chih-chieh was named Week 9 Baller of the Week after leading TB to a 3-0 week with an average of 21.6 points and 7.6 rebounds.

Lin garnered 30 points in the voting, 15 more than the closest vote-getter Dacin import Byron Allen who had 15 points.

CTBA EXTENDS CHUNG
CTBA Deputy Secretary-General Wang Chih-hsien said that the federation has re-signed Korean coach Chung Kwang-suk as the head basketball coach of Taiwan NT for the remainder of the year.

The South Korean's first test will be the East Asian Subzone qualification games, which will be held in Nagoya, Japan in June. How Taiwan NT fairs in the qualifiers will determine whether they will be able to play in Tianjin, the host city of the 2009 Asian Men's Championship, in August.

He will also take the team to Hong Kong in the end of the year for the 2009 East Asian Games.

Chung led Taiwan to a 6th-place finish in the 2007 Asian Men's Basketball Championship. He has served as head coaches for Taiwan junior and senior national teams in recent years.

FIBA STUNS CTBA
According to the CTBA, FIBA Asia has stripped Taiwan of the rights to host the 2009 Asian Women's Basketball Championship, citing the fear of a low attendance.

CTBA was expected to host the championship for the first time since 1972 from June 21-28 in Hsinjhuang Stadium, Taipei County.

FIBA Asia expressed its concern that the host wouldn't be able to fill in the stadium. CTBA proposed to move the venue to Taipei Municipal Stadium, a smaller arena, CTBA Secretary-General Kao Yuan-pu said. But FIBA Asia rejected the proposal and decided to move the tournament away.

The alternate host and game schedule is unknown at this moment.

From what I've seen, FIBA Asia's reason to move the game away is ridiculous and unbelievable. It's possible that China does not want Taiwan to host the tournament for political issues.