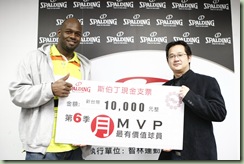 Allen, who is now leading the league in rebounding, averaged 14.8 points and 10.1 rebounds in 28.5 minutes per game. His consistent inside presence was a big reason why Dacin now ranks second in the league.

Tseng had 19 points while KKL forward Chen Ching-hwan, who is enjoying a breakout season, had 10 points.