Pippen to endorse 2009 Deaflympics for Taiwan 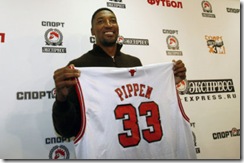 Former NBA star Scottie Pippen will visit Taiwan from April 24-27 as the Ambassador for the 2009 Deaflympics, which will take place in Taiwan in September, to enhance the international image of Taiwan and the Game, a Deaflympics spokesman said.

Pippen, 44, will arrive in Taiwan on April 24th for the 4-day visit during which he will also shoot a TV commercial for the Deaflympics, Emile Sheng said.

The former Chicago Bull star is scheduled to instruct Song-shan High School, this year's HBL champion, and Taiwan NT for the Deaflympics on April 25th. He will attend a SBL game in Hsinjhuang, Taipei County the following day and leave for the U.S. on 27th.