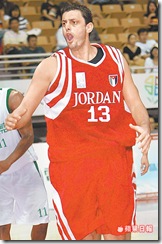 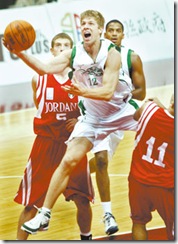 Experience and poise proved to be they key down the stretch as Jordan edged Athletes in Action 93-91 in overtime in the championship game of the 30th Jones Cup and successfully defended its title.

After a see-saw first half, AIA led by as many as 18 in the third quarter before Jordan rallied to tie the score at 79 with 11.7 seconds to go in regulation. Zaid Alkhas was fouled on a three-point attempt and made two of three free-throws to put Jordan up 81-79.

Brett Winkelman was also fouled on a three-point shot but missed two of the foul shots. Ben Woodside was fouled when he went for a rebound on Winkelman's last miss and split the free-throws to tie the score at 81.

An amazing thing happened after the final buzzer. Jordan head coach Mario Palma, who have been complaining about the officiating all tournament, furiously went after Australian referee Scott Baker. Baker left the stadium under escort.

It was not the first time Palmer threw his tantrum in the Jones Cup. Maybe he needed some anger management.

This is going to be Cody Ellis' most unforgettable night. Ellis made a pair of free-throws to send the game into overtime and followed that with a buzzer-beating three-pointer to help Emus conquer a powerful Qatar team. Australia U-19 NT finished the tournament with a very impressive third-place.

It was Qatar's game to win in regulation before it committed three consecutive turnovers. Australia made five free-throws, including Ellis' game-tying freebies, to tie the game at 75.

Australia opened the extra session with a 7-0 run, but Qatar wouldn't give up. E.A. Saeed's putback with 2.1 seconds left help Qatar go ahead 90-88, setting up Ellis' game winner.

Australia head coach Martin Clarke said after the game that actually Ellis was not the first option in the last possession but he made the winner anyway.

There was no one on Kazakhstan who could stop Wael Badr and especially Mohammed El-Kerdany. Badr had 29 points and El-Kerdany bullied his way inside for 25 points as Egypt used a 7-0 run in the last 1:30 in overtime to beat Kazakhstan 98-89.

El-Kerdany made three consecutive buckets by going one-on-one in the last two minutes of the regulation but there was nothing Kazakhstan could do. El-Kerdany (195cm, 115kg) even swished a three-pointer with 12 seconds to go as Egypt took a 80-77 lead.

On an amazing day, Maxim Voyeikov made an amazing three-point shot as the time ran out and all Egyptian players stunned. The three sent the game into overtime with score 80 all.

In overtime it was all Egypt though.

Voyeikov led Kazkahstan with 25 points while Anton Ponomarev had 18 points. Yevgeniy Issakov had 14. 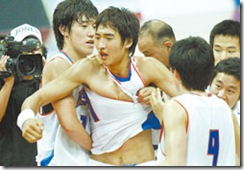 Can we say it's a tainted loss? Taiwan NT lost its eighth straight game in the Jones Cup to the Koreans and finished with an all-time worst last-place. In addition, Chen Tzu-wei punched Kim Hyeon-min with seconds to go before the end of the first half, breaking Kim's nose.

An unsportsmanlike foul was called but Chen was not ejected. Kim tried to charge to Taiwan NT bench area and go after Chen but was held back by teammates.

Korea used that as its inspiration in the second half by limiting Taiwan to five point in six minutes and led by as many as 18 points.

Taiwan made it a three-point gamee with 31 seconds to go and started fouling to freeze time. It worled a little bit but Taiwan failed to pull down rebounds following Korea's two misses and it cost them the game.

Byun Hyun-soo had 19 points for Korea University Select Team, which finished 7th-place in the tourney, while Heo Il-young had 17 points.

Taiwan receive 29 points from Lu Cheng-ju, who was 6 for 11 from threes. Hsu Chih-chan had 13 points.