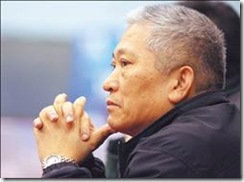 Under Chung, Taiwan NT finished an all-time worst last place in the eight-team 2008 Jones Cup tournament. However, Chung led Taiwan NT to the sixth-place in the 2007 Asian Championship, Taiwan's best finish in years.

Fans and media criticized Chung for his in-game substitutions, rotations and his communication with players since Chung doesn't speak Mandarin and has to go through a translator to communicate with players.

Personally, I support CTBA's decision. Taiwan NT was without almost all its core players -- including Chen Hsin-an, Tien Lei, Lin Chih-chieh, Wu Tai-hao, Tseng Wen-ting and Ho Shou-cheng -- in the Jones Cup. The Jones Cup team was quickly assembled and was at best a second national team.

For Chung's six-man rotation in the Asian Championship last year, he said that he would only put those players who can play on the court. And I support that. On top of that, Chung knew he had to do well in the AC to convince the CTBA about his ability to lead.

Taiwan's zone defense did improve under Chung. At least that's my observation. But it's important for him to be able to spend more time with the players and observe Taiwanese basketball. It will be difficult as the SBL season lasts six months and most players have to play for their college team in the university league.

Wang also said yesterday that Cheng Chih-lung, Chou Jun-san, Chiu Ta-tsun and Hsu Chin-tse will be young coaches the CTBA looked to develop in the future.

Taiwan will field two national teams in the Jones Cup next year, he said.