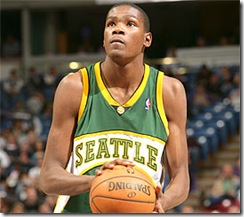 A 6-9 forward selected by Seattle Sonics in the 2007 NBA Draft, Durant averaged for 20.3 points and 4.4 rebounds in his rookie season.

Durant will attend a number of events during his short two-day stay. Arriving in Taiwan on July 26, the former Texas Longhorn will attend a press conference in the afternoon and work as an instructor in Taiwan Junior NT training camp at night.

He will participate in a NIKE-sponsored five-on-five basketball competition the next day and team with the championship team in a match with local professional players.