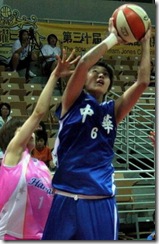 Chiang Feng-chun scored 16 of her game-high 24 points in the third quarter as Taiwan NT shook off Korea's Woori Bank in the second half en route to an 85-60 opening win. Chiang, a 27-year-old 184cm forward, also had 9 boards and 7 assists.

Donning their intriguing pink jerseys, Woori Bank led 13-10 in the end of the first quarter. But it didn't take long for the home team to turn the tide. Taiwan took the lead 26-22 after Wu Min-fang's consecutive threes and never trailed.

Taiwan controlled the boards by a 54-27 margin.

Woori Bank entered the tournament without some of its core players, who are playing for Beijing-bound Korea NT. Veteran Hong Hyun-hee paced the team with 16 points.

Australia U-19 NT towered over Malaysians with its height advantage for an easy win, leading in the rebounding department 58-26.

Australian head coach Dean Kinsman said that he was happy to know that Australia men's U-19 team played well last week here, finishing for third in the men's group, and hoped his team do well too.

Five players on Malaysia NT did not come to Taiwan with the team, said Malaysia head coach Yoong Sze-yuin, who is acutally an assistant coach. The head coach stayed in Malaysia because of an election of the Malaysian Basketball Federation, she said.