Dacin, TB one win away from SBL Finals 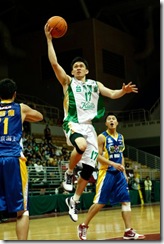 Regular season champ Dacin Tigers and two-time defending champion Taiwan Beer were one step closer to facing each other in the 2009 SBL Finals after both taking 2-0 leads over their opponents. TB got past Yulon 87-82 in over time and Dacin escape with a 96-93 win over PY. 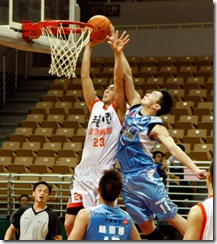 Thanks to Chang Chih-feng's timely steal with 18.7 seconds to go as the Tigers hanging on a mere two point lead, Dacin was able to stop a furious comeback bid from fourth-seeded Pure Youth. Dacin is now one win away from returning to the Finals for the first time since 2007.

Chang Yu-lin, who committed the deadly turnover, and Tsai Wen-cheng each scored 23 for Pure Youth.

Yang Yu-min scored 28 and led Taiwan Beer overcome the loss of Lin Chih-chieh and a 10-point deficit in the third quarter for a hard-fought 87-82 victory in overtime. TB takes a 2-0 lead in the series and is now in the driver's seat.

TB also had a little more luck. Point guard Hsu Hao-cheng banked in a three-pointer with 13.5 seconds to go in regulation to tie the score at 76 all and forced overtime. 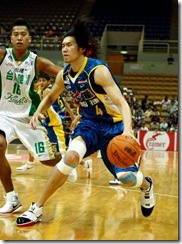 However, it seemed TB was going to lose this one in the third quarter, when it trailed by 10 points and its heart and soul Lin Chih-chieh fouled out of the game.

Yang Yu-min, who didn't join TB until late season after finishing his season in China's top pro league CBA, picked up the scoring gap. Ho Shou-cheng turned in a double-double in consecutive games with 11 and 15. Center Wu Tai-hao was also brilliant with his 14 points, 8 boards and 4 blocked shots.

However, Chen Hsin-an was once again up inconsistent, failing to score in 22 minutes. With a player of Chen Hsin-an's caliber scoring zero points in 22 minutes, you know Yulon would be in trouble. The chance for Yulon to win was pretty slim.