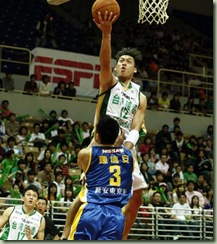 Led by Lin Chih-chieh's 31 points and 9 rebounds, Taiwan Beer beat Yulon 90-85 Saturday in what could be seen as a warmup game before the teams matching up in the first round playoffs.

TB was able to pull off a win although the coaching staff decided to rest injured starters Wu Tai-hao and Yang Ching-min to better prepare them for the upcoming playoffs.

Tseng Wen-ting led Yulon with 19 points, 12 boards and 8 assists. Tseng is on his way of securing both the rebounding and assists titles for the regular season.

Ouyang Ching-heng scored 31 points to help Taiwan Mobile score a rare victory, an 101-94 win in overtime over Pure Youth. Ouyang was 6-of-12 from three.

In the last game of the day, regular season champ Dacin rested three starters -- Tien Lei, Lin Yi-hui and Chang Chih-feng -- in a 85-82 loss to Bank of Taiwan.