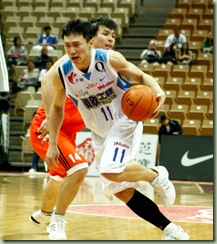 Led by Chang Chih-feng's 20 points, regular season champ Dacin Tiger regained its focus in the second half and routed fourth-seeded Pure Youth 88-70 to take the opening win in the first round series. 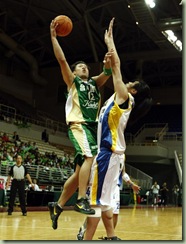 As Yulon was plagued by its subpar offensive game all night, TB used a pair of runs -- 12-2 in the second and 17-5 in the third -- to push the lead to 17 points at one point. Although Luxgen cut the deficit down to eight points with five minutes to go, TB went to work again with seven unanswered points to ice the game.

Lin Chih-chieh had 10 of his game-high 30 points in the second quarter. Ho Shou-cheng contributed 15 points. Center Wu Tai-hao was dominant in the paint, collecting 11 points and 9 rebounds. Wu's three consecutive blocks in the third quarter basically set the tone of this high-intensity game.

Chen Hsin-an was once again the only player Yulon could count on in the post season. He had a team-high 21 points. Tseng Wen-ting, Yulon's top scorer in the regular season, only had 12 points and 8 rebounds. 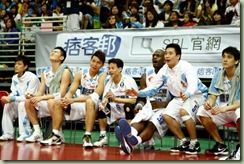 Dacin's head was not in the game until the second half, when it rode on a 50-30 rebounding advantage and increased the lead from four points in halftime to as many as 19 at one point. Give the credit to import physical specimen Byron Allen, who had 17 points and 9 boards in the game.

Chang Chih-feng led Dacin with 20 points while Tien Lei had an off night with eight points. Wu Chien-lung paced PY with 13 and 9.