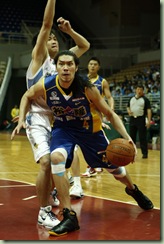 One day after being eliminated from the postseason, Yulon center Tseng Wen-ting won a consolation prize. He was named MVP of the Month for April and May by beating out Dacin forward Tien Lei 17-15.

Tseng averaged 16.6 points, 9.6 rebounds and 5.7 assists in nine games during the span. Such record from a big man should be more than enough to keep a coach happy. If not for some bad games, Tseng almost topped the league in assists in addition to leading the SBL in blocked shots (2.7 per game) once again.