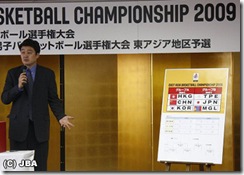 Taiwan was bracketed with Japan and Mongolia in Group B in the upcoming East Asian Zone Championship in June, host Japan Basketball Association (JABBA) announced.

China, South Korea and Hong Kong were placed in Group A. Top two teams of each group will advance to the semifinal round.

Taiwan is scheduled to meet host Japan in the opening game on June 10 before facing Mongolia on June 12. There should be no problem for Taiwan to advance to the semifinal. The most important thing will be what happens in the semi. If Taiwan fails to win in the semifinal, it won't be making a trip to China.

As China has been guaranteed an automatic seed in the Asian Championship as the host country, it will be Taiwan, Japan and South Korea fighting for two spots.

Taiwan NT head coach Chung Kwang-suk, a Korean veteran, said the team will make beating Japan its No. 1 priority. It will be the same for Japan, which hired former University of Alabama head coach David Hobbs as the head coach this year.