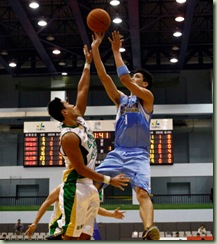 Tien Lei had 20 points and five blocks and helped Dacin to a 67-58 win over long-time rival Taiwan Beer. Dacin and Yulon both won Friday night and are now tied at 12-3.

Short-handed Yulon routed Taiwan Mobile 81-51 in the absence of Chen Hsin-an, Chen Chih-chung and Lee Chi-yi as Chou Shih-yuan picked up the scoring with 18 points and Lee Hsueh-lin added 16 points and 8 assists.

Chen Hsin-an sat out again due to knee injury. Chen Chih-chung missed the game because he was coaching Tai-shan HS in the HBL men's quarterfinal round. Lee Chi-yi did not play due to family matters.

Taiwan Mobile, which has lost six straight, was also plagued by the absence of a pair of key players. Ouyang Ching-heng was lost for ankle injury while Mario Boggan sat out due to illness.