Yulon back on top after beating Dacin 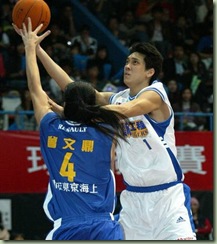 When you talk about Tien Lei's slump, usually you would imagine a game which he score less than 10 points or something like that. However, Yulon's defense took that to another level Friday night. Yulon stopped Tien from scoring, cruising to a 76-64 victory and regained the top spot on the standing with a 10-2 record.

Tien Lei set his career-low when he missed all eight field goal attempts and failed to score for Dacin, which lost its No. 1 seat with 10 wins and three losses, a half game behind Yulon.

Hsu Chih-chan's four points and a game-winning block saved the day for Bank of Taiwan, which snapped its 8-game losing streak after a 91-89 win over Taiwan Mobile.