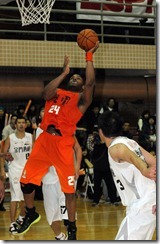 The American player received 38 points in the media poll to beat out Taiwan Beer import Emmanuel Jones, who had 15 points, for the award.

"Jennings has helped the team a lot on the defensive end and in the rebounding department, " PY head coach Hsu Chin-tse said, adding that Jenning has been in better physical condition and had no problem to keep up with his quicker teammates.

The former NCAA Division I rebounding champion was quoted as saying that he believed that he would be playing a lot better after his injury is fully recovered.