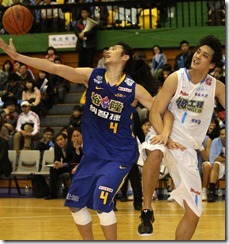 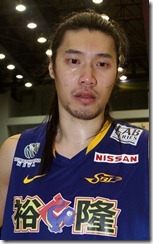 Yulon center Tseng Wen-ting played his last game with the long-time employer Yulon Luxgen Saturday and bid farewell to the SBL before going to China looking to sign with the Shanghai Sharks.

Tseng, 26, finished off his contract with Yulon Jan. 15 after both sides had failed to reach an agreement on the contract extension.

Coincidentally, the national team starting center had his first career triple-double -- 10 points, 10 rebounds and 10 assists -- in a 100-72 loss to Dacin Tigers in his last game in Taiwan.

Tseng was in tears in the post-game interview, saying that he had never imagined he would leave Yulon and Taiwan. 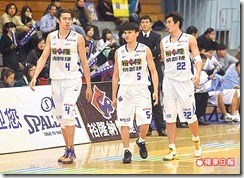 Tseng was named the regular season MVP last year and won the Finals MVP twice in 2005 and 2006. He led the SBL in blocks in all but one year during 2003-2010 and was a four-time defensive player of the year.

Looks like it's time for him to compete on a higher level. 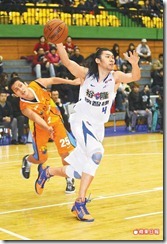 However, it's possible that Tseng will not be allowed to sign with Shanghai this year because the deadline of signing a local player (Well, Taiwan is regarded as a part of Chinese territory. This is a political issue and I'd rather not to go into specifics about it right now) has passed.

Which means Tseng could end up signing with the Sharks next year, if his application is rejected, and being left without a team this season. We will have to wait and see.

Personally, it was sad to see Tseng go. After all, I have been following his career since he was a 16-year-old in high school. But I didn't see any reason to stop him from going to China for better competition and salary after he had almost done everything he could possibly do in the league. He has also proved himself on the international level in the past Asian Championships.

Well, at least Tseng played out his contract with Yulon before leaving. It was what a professional player is supposed to do: honoring your contract.

Chen Hsin-an, who is currently playing for Dongguan, is another case. Chen's attempts of going to China was blocked several times by Yulon as he tried to leave the team with two years left on his contract.

Here's a video by Apple Daily on Tseng: