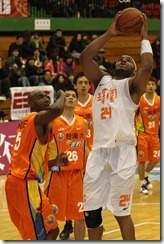 Jennings missed by a bucket to become the first SBL player to have five straight 20-20s during a season, but he did not seem to mind, saying that individual statistics came second.