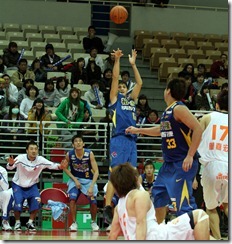 [Pic: Chou Shih-yuan made the buzzer-beater]

Chou Shih-yuan made a baseline jumper at the buzzer as Yulon knocked down previously undefeated Pure Youth 76-74 in the SBL's first overtime game of the season Sunday night.

The exciting game didn't finish without a couple of controversial calls. Yulon center Tseng Wen-ting, the designated go-to man on the last play in overtime, obviously pushed PY defender Hong Chih-shan out of his way to the hole before passing the ball to Chou.

Yulon PG Chen Chih-chun's apparent offensive foul was also ignored and turned into the fifth foul on PY import Rashad Jones-Jennings in the final minute of the 4th quarter.

The pair of calls ruined the night for PY, which rallied behind an 18-7 4th quarter to take the game into overtime.

Tseng Wen-ting led Yulon with 16 points and Chou scored 15. Jones-Jennings had 14 points and 25 rebounds before fouling out. Hong Chih-shan and Chang Yu-lin also scored 14 apiece for PY, which is now tied with Yulon 3-1.

In other games, Dacin finally got its first win of the season with an 86-72 win over KKL, which dropped to 0-4 and is still awaiting the arrival of Shawn Hawkins to fill the void of Sheldon Bailey.

Tien Lei had 21 points and 10 boards in 24 minutes and Chang Chih-fung made 9 of 13 shots en route to his season-high 19 points. Keith Gayden added 17 points and 18 rebounds for Dacin.

Taiwan Beer routed Taiwan Mobile 73-59 in the last game of the night. 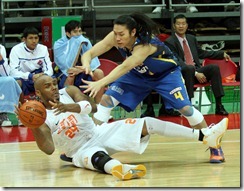 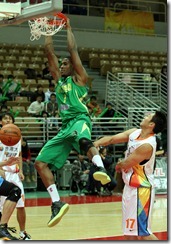