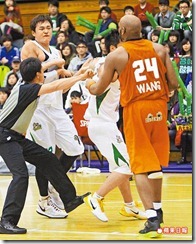 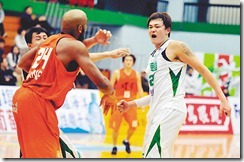 -- Yulon is reportedly to bring in imports for testing after losing starting center Tseng Wen-ting, who did not re-sign with the team. According to media reports, Yulon will bring in two imports next week before making the final decision.

-- Speaking of Tseng, the 204cm center made an appeal to the Chinese basketball authority to look for an opportunity to join the CBA in mid-season. Tseng wanted the league to make an exception for him after the deadline of local player registration passed last November.

-- Dacin sent away Keith Gayden, who averaged 16.2 points and 12.6 rebounds, for unknown reasons and brought in a familiar face Alexus Foyle, who played with Taiwan Mobile last season. Local media reported that Gayden did not blend in well with his teammates despite his stats were outstanding. Foyle averaged 23.2 points and 9.8 boards last year in 22 games.

-- TB center Wu Tai-hao and PY import Rashad Jennings will be suspended for one game with a NT$10,000 fine each for fighting in the Jan. 22 game. Local media reported that Wu threw an elbow at Jennings before the import retaliated. TB rookie Wu Min-hsien also received a one-game suspension and a fine of NT$10,000 for leaving the bench area during the altercation.

-- Honestly, I don't have a clue why Jennings has been wearing his #24 jersey with the surname of WANG instead of JENNINGS.