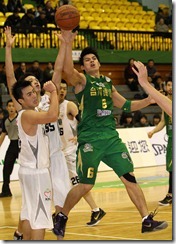 Yang averaged 20.7 points, 6 rebounds and 4.3 assists for the week and was one of the main reasons why TB is leading the seven-team league with 12 wins and one loss.

He received 39 points in the weekly media poll. TB import Emmanuel Jones ranked second in the poll with 14 points.