Another Jeremy Lin feature from TIME.com 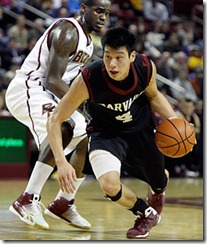 Harvard's Hoops Star is Asian. Got a Problem with That?
By Sean Gregory

Certain truths are tied to March Madness, that time of year when the NCAA men's basketball tournament turns every cubicle-dweller into a college hoops junkie. That batty lady who picks the winners based on the cuteness of the mascots will crush you in your office pool. Duke will have a guy that gets under your skin. And the Harvard basketball players will be locked in the library instead pulling off the Cinderella upset.

It's been 64 years since the Crimson appeared in the NCAA tournament. But thanks to senior guard Jeremy Lin, that streak could end this year. Lin, who tops Harvard in points (18.1 per game), rebounds (5.3), assists (4.5) and steals (2.7), has led the team to a 9-3 record, its best start in a quarter century. Lin, a 6 '3" slasher whose speed, leaping ability, and passing skills would allow him to suit up for any team in the country, has saved his best performances for the toughest opponents: over his last four games against teams from the Big East and Atlantic Coast Conference, two of the country's most powerful basketball leagues, Lin is averaging 24.3 points and shooting nearly 65% from the field. "He's as good an all-around guard as I've seen," says Tony Shaver, the head coach of William & Mary, which in November lost a triple overtime game to Harvard, 87-85, after Lin hit a running three-pointer at the buzzer. "He's a special player who seems to have a special passion for the game. I wouldn't be surprised to see him in the NBA one day."

A Harvard hoopster with pro-level talent? Yes, that's one reason Lin is a novelty. But let's face it: Lin's ethnicity might be a bigger surprise. Less than 0.5% of men's Division 1 basketball players are Asian-American. Sure, the occasional giant from China, like Yao Ming, has played in the NBA. But in the U.S., basketball stars are African-Americans first, Caucasians second, and Asians. . . somewhere far down the line. (One historical footnote: Wat Misaka, who is Japanese American, became the first non-white person to play in the NBA in 1947.)

Lin caught the hoops bug from his father, Gie-Ming. Before he immigrated to the U.S. in the 1970s, Gie-Ming would scour Taiwanese television for any highlights of NBA games. Once in the states, he studied Larry Bird, Kareem Abdul-Jabbar and the classic Los Angeles Lakers-Boston Celtics games from the 1980s. "I cannot explain the reasons why I love basketball," says Gie-Ming, a computer engineer. "I just do."

By the time Jeremy was five, Gie-Ming was taking him to the local YMCA in Palo Atlo, California to play ball in a kid's league. For Jeremy, it wasn't exactly love at first sight. "He stood at half-court sucking his thumb for the eternity of about half his games that season," says Jeremy's older brother, Josh, 24. "It came to the point where my mom stopped going to watch his games." Then, Jeremy asked his mother, Shirley, to start coming to the Y again. Before Shirley would commit, however, she wanted to know if he'd actually try. "He responded with something along the lines of 'I'm going to play, and I'm going to score,'" Josh says. She showed up, and Jeremy scored the maximum amount of points one player could amass under the kiddy-league rules. "From that game on, he just took off and never looked back," says Josh.

Throughout Jeremy's childhood, Gie-Ming would take him to the YMCA after he finished his homework. They would practice, and play in pickup games. "Many Asian families focus so much on academics," says Gie-Ming. "But it felt so good to play with my kids, I enjoyed it so much." Jeremy won a state championship as a senior in high school, but he received no Division I scholarship offers (Ivy League schools cannot give athletic scholarships). Yes, he was scrawny, but don't doubt that a little racial profiling, intentionally or otherwise, contributed to his under-recruitment.

Some people still can't look past his ethnicity. Everywhere he plays, Lin is the target of cruel taunts. "It's everything you can imagine," he says. "Racial slurs, racial jokes, all having to do with being Asian." Even at the Ivy League gyms? "I've heard it at most of the Ivies, if not all of them," he says. Lin is reluctant to mention the specific nature of such insults, but according to Harvard teammate Oliver McNally, another Ivy League player called him a c-word that rhymes with "ink" during a game last season. Just last week, during Harvard's 86-70 loss to Georgetown in Washington, D.C., McNally says one spectator yelled "sweet and sour pork" from the stands.

In the face of such foolishness, Lin doesn't seem to lose it on the court. "Honestly, now, I don't react to it," he says. "I expect it, I'm used to it, it is what it is." Post-game, Lin will release some frustration. "He gets pissed about it afterwards," says McNally. "I have to tip my hat to him. I don't know how I'd react. The type of dude I am, I might not be as mature as Jeremy."

Lin's maturity could lead him to ministry. A devout Christian, Lin, who is an economics major, is considering becoming a pastor in a church near his Palo Alto home. "I've never really preached before," Lin says. "But I'm really passionate about Christianity and helping others. There's a beauty in seeing people change their lifestyles for the better."

Before settling on a career, however, Lin has some on-court business to attend to. Harvard has racked up some impressive wins early in the season. The team upset Boston College in early December, and knocked off a 9-2 George Washington team this week, 66-53. The Crimson, who play next at Seattle University on Jan. 2, should challenge two-time defending champion Cornell for the Ivy title; a league championship would give Harvard that elusive trip to the NCAA Tournament. And Lin wants to give pro basketball shot, most likely overseas or, who knows, maybe the NBA.

"I can definitely see him being in ministry," says Steve Chen, Lin's mentor and the pastor of the Mountain View, Calif. church the Lin family attends. "But right now, God has gifted him in a specific way, and he's going to go after it hard." If Lin leads Harvard to the tournament, he'd be off to a pretty holy start. Consider it his first miracle.