Jonathan Sanders had 17 points, 15 rebounds and 10 assists, his second triple-double in the league, as Pure Youth beat Bank of Taiwan 86-81 Saturday.

Sanders also had 5 steals and three blocks in the game. The 6-6 forward registered his first triple-double -- 17 points, 16 rebounds and 17 assists -- on Dec. 23, 2007, when he played for dmedia Numens. The 17-assists effort still ranks as the SBL's all-time single-game assist record.

BOT import Jeff Jones is still waiting for his working permission. He did not play. 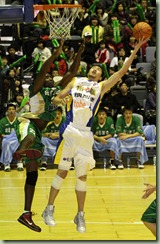 Yulon head coach Zhang Xue-lei was quoted as saying the team was almost certain that it would not hire any import this season.

From what I've seen and heard, Taiwan Beer was not happy with its import Delvin Thomas and Thomas could be replaced. And why was TB head coach Yen Chia-hua not happy? Because they were not winning.

However, the key for TB is that it needs a good point guard badly to organize the erratic offense. And Chen Shih-nian is not the answer. TB probably misses PG Hsu Hao-cheng more than Lin Chih-chieh, both of whom are playing in China this year. Secondly, TB's defense has a lot of room for improvement, and Wu Tai-hao needs to pick up his intensity. It seemed to me that the local players decided to leave the defense to Thomas.

The problem with most Taiwanese teams are whenever they lost, the blame fall on the import players because they get better pay and they are supposed to be responsible. 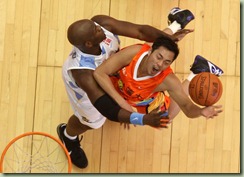 Dacin used a 12-0 closing run in the last four minutes to beat Taiwan Mobile 64-62. Dacin center Byron Allen scored 9 of his 11 points in the final period. Wang Chih-chun made a three-pointer with 62 seconds left helped Dacin pull ahead.

Taiwan Mobile import Antonio Grant made his debut in Taiwan, scoring 15 points in 17 minutes as a substitute. Grant said he needed some time to made adjustment to the new team and style of play.