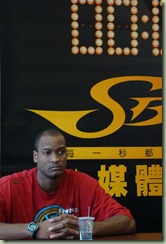 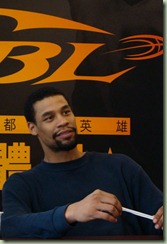 Though the two newcomers have had to alter their styles to the local game, they both say they're happy to be playing here, have the chance to explore a different culture, and showcase their talent to take their teams to the next level.

To improve its competitive level, the seven-team SBL decided for the first time this year to allow all of its teams to hire foreign players rather than limit the option to non-playoff teams, as had been the case in the past.

That was what brought Hawkins and Jones to Taiwan in January and why the 2010 SBL season has been billed as "a battle of foreign players." The expectations have so far panned out. Hawkins is averaging a league-best 22.7 points and 9.3 rebounds while Jones is currently leading the league with 13.3 rebounds per game, and his 19.3 points per game ranks fourth.

With Hawkins' help, Kinmen Kaoliang Liquor (KKL) has opened the season with a 4-2 record and is the league's most improved team.

Hawkins says he is used to people talking about his grandfather, but he is now happy to know that he can also be his own man and show the fans what he can do.

Jones landed in Taiwan through the power of the Internet. Doug Creighton, Jones' teammate at Bank of Taiwan (BOT), was assigned to find another foreign player for the team because of his U.S.

background, and he found Jones' contact information on a basketball Web site and sent him an e-mail to initiate the deal.

The 203-centimeter forward has only appeared in three games so far this season because of an extended delay in getting a work permit, but it was worth the wait.

Jones had 20 points and 20 rebounds Saturday in leading BOT to an upset win over powerhouse Yulon Luxgen and helping snap the team's six-game losing streak.

Both players have been forced to play different positions in Taiwan than they were accustomed to in the United States because of the generally shorter Asian players.

That means Hawkins, a shooting guard in the U.S., is playing forward, and Jones, a natural small forward, has to play all three frontcourt positions.

The SBL, like other Asian leagues, features a more fast-paced game, observes Hawkins, who also has played in South Korea. Jones agrees, saying that the league is more of a guard-based game focused on jump shots and three-pointers rather than driving and dunking.

Before arriving in Taiwan, neither of the two players knew much about the country, and the newcomers have not had the time or opportunity to explore Taipei or the island because of tight game schedules and pressure to turn the team around immediately.

But they've taken to Taiwan's fans, Hawkins says, "because they support you whether you're winning or losing." The group of six U.S. players have a unique relationship -- they are rivals on the court and friends off it, hanging out to soothe their homesickness.

Besides Jones and Hawkins, only Taiwan Mobile's Antonio Grant is new to the league, while the other three are familiar with Taiwan.

Byron Allen helped Dacin Tigers to its first championship in history last season and re-signed with the team. Jonathan Sanders became the first import to play for three Taiwanese teams when he signed with Pure Youth Construction, and Taiwan Beer's Delvin Thomas also returned with a different team.

"We were always taught in the States to leave everything on the basketball court. Once the buzzer starts, we're enemies. But once that buzzer's over, we can smile and hang out, " Jones said.