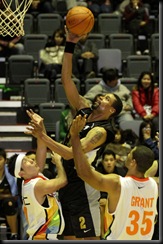 Meanwhile, Dacin forward Tien Lei registered SBL's second triple-double of local players in the 83-65 rout of Bank of Taiwan, the only winless team in the league after two weeks of action.

Tien had 18 points, 14 boards and 11 assists for his first career triple-double. Tien's teammate Wang Chih-chung became the first Taiwanese player to have a triple-double when he tallied 19 points, 11 rebounds and 13 assists in a game vs. Sina Lions during the 2004-05 season.

Taiwan Beer head coach Yen Chia-hua said after the team lost to Pure Youth and dropped to 1-3 that TB could choose not to sign any import for the season if Delvin Thomas is not kept eventually.

Antonio Grant had 8 points and 8 rebounds for TM in 18 minutes. So far Grant has not received too much playing time, coming off the bench in both games.