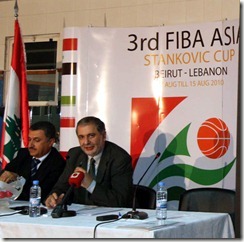 Taiwan was bracketed in Group A with Iran, Iraq, Japan and Kazakhstan in the 2010 FIBA Asia Stankovic Cup. At first glance, it looks like a better group to be in than Group B, where all five teams are pretty competitive.

The draw was completed at Ghazir Sporting Club, Beirut the venue for the competition on Monday.

Joining Iran in Group A are fellow West Asian team Iraq who will make a comeback to FIBA Asia men’s National Team competitions after a gap of almost a quarter of a century. Iraq had last played in the 14th edition of FIBA Asia Championship, when it was hosted by Bangkok in 1987.

East Asian duo Chinese Taipei and Japan and Middle Asia’s Kazakhstan are the other teams in Group A.

Group B will witness stiff competition between hosts Lebanon and Jordan who have both qualified to represent FIBA Asia in the 2010 FIBA World Championship to be played in Turkey from Aug 28-Sept 12.

Jordan, who won the bronze medal at the 25th FIBA Asia Championship in Tianjin last year to qualify for the 2010 FIBA World Championship, were given a wildcard entry. Jordan, in fact, will enter the fray as the defending champions of the FIBA Asia Stankovic Cup, having won the gold medal in the 2008 edition at Kuwait.

Commenting on the draw FIBA Asia Deputy Secretary General Hagop Khajirian, who was present at the draw ceremony said: “The fray for the 3rd FIBA Asia Stankovic Cup is the most competitive in all the three editions of this event.”

“My opinion is that the draw, which is rather well balanced, only augurs well for the high-pitched battles basketball fans of Lebanon are expecting from this competition,” Khajirian.

Explaining the entry of Jordan into the competition, Khajirian, who is also the Chairman of the FIBA Asia Media and Marketing Committee said: “It is logical, isn’t it? We had one slot vacant. It was obvious that a team representing FIBA Asia in the FIBA World Championship deserves to get that slot more than any other team. And let’s not forget Jordan will defend their title when they play in this competition.”

FIBA Asia president Sheikh Saud bin Ali Al-Thani said: “Three teams in this competition are heading to Turkey for the 2010 FIBA World Championship. It can’t get more exciting for the basketball fans in Asia in general, and Lebanon in particular.”

FIBA Asia Secretary General Dato Yeoh Choo Hock said: “Along with teams preparing for the FIBA World Championship, this is also the qualifying tournament for next year’s FIBA Asia Championship, which also will be hosted by Lebanon in Beirut.”

“Therefore, in more than one sense, the 3rd FIBA Asia Stankovic Cup is a very good dress rehearsal for the 26th FIBA Asia Championship next year, which will qualify FIBA Asia’s representative to the 2012 London Olympics.”

The 10 teams are drawn into two Groups of five each for the Preliminary Round. Each team will play all the others in their respective Groups. The top four from each Group will advance to the knockout Quarterfinals. The teams finishing fifth in the groups will play off for the 9th place.