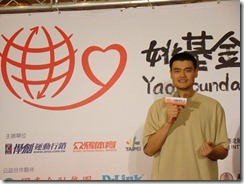 Chinese basketball center Yao Ming entertained a local audience Tuesday with his famous one-liners during the first press conference of his charity tour and his first visit to Taiwan since 2007.

When asked about his financial plans, the 2.29-meter National Basketball Association All-Star said, "Give all my salary to my wife."

Asked about changes in his personal life between 2007 and 2010, during which he got married, became a father and bought the Chinese Basketball Association's Shanghai Sharks, Yao quipped: "I'm driving much slower now (because of a child in car)."

Yao's quick wit is one of the few things that have not changed since his first visit to Taiwan in 1997, when he was an unknown and unusually tall teenager player who did not even get the chance to play for the visiting Sharks.

Entering the NBA in 2002 as the top pick in the draft, he is now a symbol of Chinese basketball, a seven-time NBA All-Star and is in the middle of a five-year, US$76 million contract with the Houston Rockets.

The 30-year-old, who sat out last season due to a foot injury, said that his rehabilitation has gone well and that he is excited to be able to participate in scrimmages in the Rockets training camp to prepare for the new season.

He will not play, however, in a charity game Wednesday that will see NBA players including Brandon Jennings of the Milwaukee Bucks, Hasheem Thabeet of the Memphis Grizzlies, DaJuan Summers of the Detroit Pistons and Amir Johnson of the Toronto Raptors meet a mixed team of Taiwanese and Chinese players at the Taipei Arena.

The game is part of a charity tour organized by the Yao Ming Foundation, which the star center established in 2008 as the "headquarters" of his philanthropic work. In addition to his quick wit, Yao's agent Bill Duffy said the player's humanity has been one of his most consistent characteristics.

A total of 4,000 tickets to the charity game will be donated to disadvantaged children and various social organizations.

Yao said he was always happy to be involved in charity events. The deadly Sichuan earthquake in May 2008 expedited the establishment of the Yao Ming Foundation, which lists its first priority as child education.

"Education is the best gift we can give to children, " said Yao, adding that the foundation plans to use donations to establish elementary schools, offer scholarships and focus on schoolchildren's nutrition.

Yao told the crowd he still wants to accomplish great things on the basketball court, devote as much time and energy as possible to his charity work and take care of his family -- enough to keep him pretty busy.

Yao gave a parting shot when he answered a question about his personal plans beyond basketball, saying: "Forget television commercials. I know I'm not as good-looking as David Beckham."