Lebanon and Iran are now 2-0 with Taiwan NT and Philippines one step behind at 2-1.

Taiwan opened the game with a brilliant 29-18 first quarter but had no answers against Lebanese towering fronline with only one player taller than 200 centimeters. Lebanon hit the offensive boards and ignited a 23-6 run in the second half for a double-digit lead with more than four minutes to go in the period.

Almost half of the Taiwan national team players -- and four fifth of its starting lineup -- sat out the tourney due to injuries to rehab for the upcoming Asian Games, which will be held in Guangzhou, China in November.

Marcus Douthit, an American-born naturalized 211-centimeter center, had 17 points and 13 rebounds and led the Philippines to a 90-64 victory over Townsville Crocodiles of Australia, which remained winless after three games. Dylon Simon Ababou scored 17 for the Philippines. The Crocs was led by Damian Matacz, who had 16 points, and Lee Smith, who had 13.

Taiwan national team and Korea's Sinsegae Coolcat are leading the 4-team women's competition, which will have a cross-over semifinal after a single round robin preliminary round. 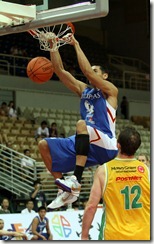 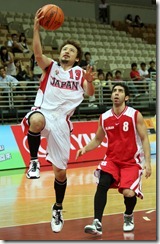