Iran came from behind to beat Lebanon 79-71 Saturday in the battle of two undfeated teams in the 2010 R. William Jones Cup basketball tournament while host Taiwan was handed its first defeat after a 94-85 loss to Japan.

Defending champion Iran is now 3-0 after the win as Lebanon and the Philippines are one step behind at 2-1 respectively in the seven-team single round-robin men's competition. Taiwan tied with Japan at 2-2.

Iranian forward Mohammad Samad Nikkhah Bahrami scored 30 points, including 17 in the first half, in the much-anticipated game between the defending Asian champion and its West Asian opponent Lebanon, which finished 4th in the last Asian Championship. 2.10-meter center Asghar Kardoust Poustinsaraei added 20 points and 14 boards.

After see-sawing first three quarters, Iran finally took advantage of the absence of Lebanese big man Jackson Vroman, who fouled out of the game with four minutes to go, in the last period during which it outscored Lebanon 26-7 to go from behind.

Vroman led Lebanon with 14 points and 7 rebounds. Rony Fahed had 10.

Japan did not panick when Taiwan opened the game aggressively and led by double-digit after five minutes. Led by point guard Yuta Tabuse and Takuya Kawamura, who had a team-high 25 points, Japan toughened up its defense and answered with fastbreaks of its own to lead by three, 48-45, at the half and never looked back.

Taiwan University All-Stars beat Australia Crocodiles 88-77 for its first win. The Crocs suffered its fourth straight setback. The younger Taiwan University, which trailed by as many as 16 points early, took advantage of the slower and older Aussie with runs of 17-3 and 14-2 in the third and final period.

South Korea will meet Kazakhstan and Taiwan will meet Taiwan University All-Stars in the semifinals. 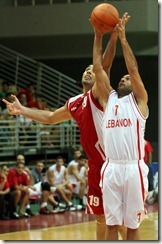