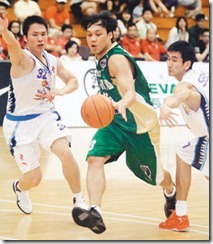 Chen Shih-nian scored 10 of Taiwan Beer's 12 points in the overtime as TB beat Fujian SBS 92-88 Friday in the 2010 Straits Cup invitational tournament. Lin Chih-chieh had 4 three-pointers in the 4th period for TB, which led by as many as 12 points earlier in the game.