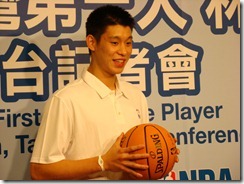 Twenty-two years-old Jeremy Lin, who signed a two-year partially-guaranteed contract with the NBA’s Golden State Warriors last week, was back in Taiwan for a charity game and a children basketball camp.

All of these happened after a simple phone call from Yao Ming, who told Taiwan media that he was impressed with what Lin has accomplished and invited him to join Yao Foundation in Taiwan for its charity tour.

Less than 12 hours later, the Lin family -- including Lin’s father Lin Gieming, his mother Wu Hsinhsin and two brothers -- was on the plane back to Taiwan.

In case you’ve never heard of him by now, it’s not difficult to find him on the internet. (See Jeremy Lin on Wikipedia)Also make sure to watch these Youtube clips below. Lin became the first Harvard graduate in 57 years to make it the the NBA. He is also the first Taiwanese-American player to sign with a NBA team.

Lin became the overnight sensation in Taiwan after his signing. He was everywhere from newspapers, magazines to television news. In fact, the news reporting in Taiwan did not lag far behind that in the U.S., where Lin has been featured constantly since March.

NBA Taiwan called a press conference for Lin on Wednesday, featuring him as “the first Taiwanese player in the NBA.” The press conference attracted tons of media. I personally counted there were more than 30 TV cameras and about 100 reporters at the Westin Hotel, where the press conference was held. (See Jeremy Lin attributes achievements to family, faith) 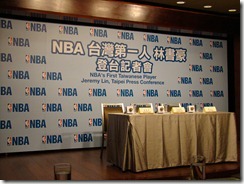 Lin attributed much of his “success” to his family and religious faith -- he was a devout Christian who still envisions himself as a pastor some day.

He said he chose the Warriors because of many factors, including the size of the contract, the style of play, roster space and location -- the Lins live in the Bay area.

Being an Asian-American player out of Harvard was never an advantage, he also told the media, because of stereotypes that Asians are weaker than other players and that Ivy League graduates are better at academics than basketball.

About the possibility of representing Taiwan in international competition, Lin said he knew that many rumors "are flying around, " but "no decision has been made."

Meanwhile, religion has been a major part of life for Lin, who has said he would like to be a pastor someday and help underprivileged children in urban areas -- the reason he chose to major in economics and sociology at Harvard.

Lin, who idolized Michael Jordan growing up, said the transition from the college game to the NBA will require work on "almost everything, " from ball-handling to strength to a different shot- clock.

His goal for the upcoming season will initially be getting "in the rotation, " and then becoming the starting point guard. Longer term, he said he wants to win an NBA championship.

About the comparison between him and NBA standout Steve Nash, Lin said it’s been a honor to be compared with Nash, but all he could say was that both of them “are point guards, play with basketball IQs, and love to run the pick-and-roll.”

Lin has been very cautious and low-key in the question and answer session of the press conference. As a fan, I like that because he tries to keep everything in perspective and not to be big-headed. After all, the road ahead is long. 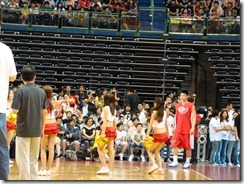 Lin scored 17 points in the charity game Wednesday night. The game featured a team of NBA active players against a mixed team of Taiwanese and Chinese players. It was like any other charity game or All-Star game which players showcased their one-on-one skills and dazzled the fans with highlight-reel dunks. Team NBA, consisted of Lin, Brandon Jennings of the Milwaukee Bucks, Hasheem Thabeet of the Memphis Grizzlies, DaJuan Summers of the Detroit Pistons, Amir Johnson of the Toronto Raptors, Luke Babbit of the Portland Trail Blazers and a pair of Yao's Houston teammates, Aaron Brooks and Chase Budinger, won by the score of 137-103.(See Jeremy Lin, Jennings catch fans’ eyes at Yao’s charity basketball game)

It was not a competitive game at all. But it seemed to me that Lin was more comfortable driving than shooting. In fact, Lin was able to do so because he was actually more athletic than people thought. From what I’ve seen, he has good shooting mechanics, so he will be able to develop his perimeter game in the NBA with no problem.

I agreed with Taiwanese player Chen Chih-chung’s observation that Lin knows very well how to protect the ball on his drives, which is very important for a slashing type of player. Fans were unable to witness Lin’s skill to run the offense as a point guard though, given the fact that it was a charity game and Lin was not familiar with his NBA teammates at all.

Sources told me that NIKE Taiwan is negotiating with Lin’s agent Roger Montgomery for a show deal, but it’s possible that NIKE global will take over if it finds Lin is worth it. Lin wore NIKE shoes at Harvard, which is sponsored by NIKE.

Lin wore Adidas shoes and apparels though when he appeared with Dwight Howard at a children basketball camp in Taipei Thursday morning, which is sponsored by Amway and is a project under the NBA’s Junior NBA program.

The Lins met with their relatives in Taiwan, including Lin’s grandmother whom he is very close with but hasn’t met for years, before flying back the the U.S. Thursday night. In between, Lin also met with Taiwan President Ma Ying-jeou.

Lin is expected to fight for playing time at the point guard position with Stephen Curry and newly-signed Jannero Pargo at Golden State, but he should be able to enjoy Don Nelson’s fast-tempo offense and make solid contribution as a backup or third point guard in his rookie season.

No matter what happens, Taiwanese fans will be watching and giving support. At least two local newspapers have decided to send correspondents to the Bay area to cover Lin in the pre-season training camp as well as the regular season games.

As far as representing Taiwan in international competitions, I think Lin will be very carefully weighing that decision, especially at the most important time of his young NBA career. Personally, I think Lin’s agent will advise him against it because too much is at stake.