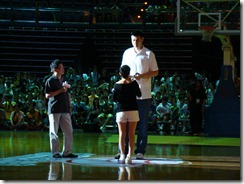 All eyes on Yao, Lin in charity basketball game

The 48-minute game, organized by the Yao Foundation as a part of a charity tour in Taiwan, was played between two teams composed of active NBA players and players from China and Taiwan. All proceeds will be donated to local charities.

Hometown favorite Jeremy Lin, who signed a two-year contract with the Golden State Warriors last week, drew a standing ovation when he took the court with 6:45 to go in the first quarter.

Lin was a late addition to the team, returning to Taiwan early Wednesday for a whirlwind two-day visit after he received a phone call from Yao.

With his parents and brothers watching on the sidelines, Lin shot a three-pointer late in the quarter but also committed a 24-second shot-clock violation, which showed that he still has to adjust to the professional game.

Yao Ming did not play in the game because he is still recovering from a foot injury. However, the 2.29-meter tall center was the reason the game took place.

The Yao Foundation, established in 2008, organized the charity tour during which Yao visited underprivileged children in southern Taiwan.

Team Love, which consisted of NBA players, matched up against Team Heart, which was made up of players from the Shanghai Sharks and an All-Star team in the local Super Basketball League. The Sharks played in the first and the final quarter, while the SBL All-Stars took the court in the remaining two quarters.

They opened the game against the Sharks with a 23-5 run and quickly established a 20-point lead.

Taiwan's All-Star team was unable to contain the stronger taller U.S. visitors, who scored in runs on easy baskets, in their designated two periods. 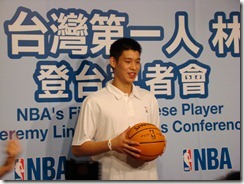 Taipei, July 28 (CNA) Jeremy Lin, the first player of Taiwanese descent to sign a regular season contract with a National Basketball Association (NBA) team, attributed his achievements to his passion for the game, support from his family and Christianity during a press conference in Taipei Wednesday.

The 21-year-old told about 100 reporters and more than 30 television cameras that he was thankful for the overwhelming support and attention he has received in Taiwan, where his parents lived before emigrating to the U.S. in the 1970s and where he still has many relatives.

Lin, who signed a partially guaranteed two-year contract with the Golden State Warriors worth approximately US$500,000 last week, arrived in Taiwan early Wednesday with his family to participate in a charity game hosted by Chinese star player Yao Ming.

He will also attend a children's basketball camp Thursday -- part of the Junior NBA program sponsored by Amway -- before flying back to California to prepare for the upcoming season.

Lin burst onto the scene this past year as he was named Ivy League Player of the Year, averaging 16.4 points, 4.4 rebounds, 4.5 assists, 2.4 steals and 1.1 blocks. He was passed over in the NBA Draft in June, but his strong performance in the summer league caught the attention of several teams.

The Warriors signed him on July 21, making him the first Harvard graduate in 57 years to formally sign with an NBA team.

He said he chose the Warriors because of many factors, including the size of the contract, the style of play, roster space and location -- the Lins live in the Bay area.

Being an Asian-American player out of Harvard was never an advantage, he said, because of stereotypes that Asians are weaker than other players and that Ivy League graduates are better at academics than basketball.

About the possibility of representing Taiwan in international competition, Lin said he knew that many rumors "are flying around, " but "no decision has been made."

Meanwhile, religion has been a major part of life for Lin, who has said he would like to be a pastor someday and help underprivileged children in urban areas -- the reason he chose to major in economics and sociology at Harvard.

Lin, who idolized Michael Jordan growing up, said the transition from the college game to the NBA will require work on "almost everything, " from ball-handling to strength to a different shot- clock.

His goal for the upcoming season will initially be getting "in the rotation, " and then becoming the starting point guard. Longer term, he said he wants to win an NBA championship.