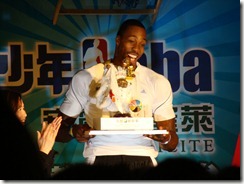 Howard, a 2.11-meter four-time All-Star selection who plays for the Orlando Magic, returned to Taiwan for the first time since 2005 and met fans Monday in downtown Taipei before heading a children's basketball camp from July 27-30.

"I miss you guys. It's been five years, " Howard told more than 300 screaming fans in a meet-the-fan event held in the plaza outside Vieshow Cinemas in eastern Taipei.

He also pleased the crowd by promising to persuade NBA commissioner David Stern to bring a regular season NBA game to Taipei.

Howard is visiting Taiwan as an ambassador of the 2010 Junior NBA Challenge, which is a part of the NBA-initiated charity program NBA Cares.

He is scheduled to personally train 60 schoolchildren aged 7-12 at a four-day camp, sponsored by Amway, before selecting six children for a special prize. The selected children will play two games with teams from China in August for a free trip to the 2011 NBA All-Star Weekend in Los Angeles. 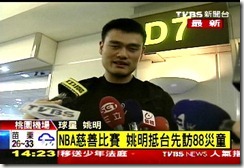 Yao, a 2.29-meter center who was the first Chinese player in the NBA and currently plays for the Houston Rockets, is visiting Taiwan for the first time since 2007 to play in a charity game at Taipei Arena on July 28 as part of his Yao Foundation Charity Tour.

After arriving at Taoyuan International Airport, the 29-year-old seven-time NBA All-Star headed directly to Kaohsiung in southern Taiwan by high speed railway to meet with a group of children who suffered from the devastation of Typhoon Morakot.

The typhoon, which pummeled much of southern Taiwan last August, left more than 450 people dead and more than 190 others missing.

Yao shared his expertise at a basketball clinic and offered words of encouragement to the children, whose homes were wiped out by the worst typhoon to impact Taiwan in half a century.

Yao will be joined in the charity game by six active NBA players -- Brandon Jennings of the Milwaukee Bucks, Hasheem Thabeet of the Memphis Grizzlies, DaJuan Summers of the Detroit Pistons, Amir Johnson of the Toronto Raptors and a pair of Yao's Houston teammates, Aaron Brooks and Chase Budinger.

Also participating in the event will be 14 players from the Shanghai Sharks, a team in China's professional league owned by Yao, and Taiwanese entertainers, including popular singer Jay Chou.