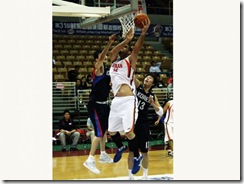 Korea recorded its first win against Iran in recent years with a 76-69 win and became the first team to reach 3-0 in the 2009 Jones Cup Monday.

Korea closed out the first half with a 13-0 run for a 35-28 halftime lead. It kept up its pressure defense on Iranian shooter Nikkah Bahrami in the second half to keep Iran at bay.

Iran committed 17 turnovers. That was seven more than Koreans and definitely hurt them.

Mahdi Kamrany had a team-high 24 points for Iran.

Korea is not that much better than Iran, Iran head coach Veselin Matic said. "However, Korea controlled the tempo tonight. That's what we didn't do."

Jordan 73-63 Lebanon
Jordan sent a message to Lebanon, its opponent in the same prelim group in the upcoming Asian Championship: don't underestimate Jordan in Tianjin next month. With a convincing 73-63 victory, Jordan proved it's a team to reckon with.

Lebanon held a four point lead at the half as Fadi Khatib and Brian Feghali combined for 22 points. Jordan hit the offensive glass hard in the second half, outscoring Lebanon 25-13 in the 3rd period and changed the momentum of the game.

"Lebanon is a very strong team, " Daghles said. "We won this one, but that does not mean we are better than Lebanon. We still have a tough battle to fight in Tianjin."

"We want to play our best in every game. Let there be no doubt. We're looking for a three-peat in the Jones Cup, " said Jordan head coach Mario Palma. Jordan has won Jones Cup in 2007 and 2008.

Feghali, who has been playing extremely well in the tournament, chipped in 19 points for Lebanon. 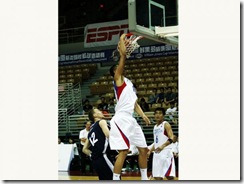 Philippines walked out of the shadow and beat short-handed Kazakhstan 85-67 for its first win in the Jones Cup after two consecutive losses.

In his pre-game speech, head coach Yeng Guiao reminded his players not to disappoint thousands of fans back in the Philippines

Philippines showed its desire to win this game with a 22-12 opening quarter, including 11 straight, and never let go.

206cm center Japeth Aguilar was one of the key men, scoring five straight as Philippines held a seven-point advantage at halftime.

Aguilar didn't stop there, dominating inside and going out on the fastbreak in the third quarter as Philippines withheld Kazakhstan's rally.

Gabe Norwood had seven points in a 13-2 run in the third quarter as Philippines took a 14-point advantage to the final period.

Jayjay Helterbrand was definitely man of the night though. The PBA MVP entered the game despite a sore leg and scored 7 points in 16 minutes. Hundreds of oversea Filipino workers chanted "MVP, MVP."

"We need to represent ourselves like a national team from now on. This is not a pick-up game whatsoever, " Helterbrand said.

Chang Chih-feng had 19 points for the winner, including 8-for-8 from the foul line. Wu Tai-hao and Yang Chin-min each scored 11 points.

Taiwan 2nd NT was led by Hong Chih-shan's 18 points. Jet Chang, who was dubbed as the second coming of Chen Hsin-an by many, was again mediocre. Chang had 11 points but shot 1-for-7 from three.

Taiwan 2nd NT surprised the senior NT by leading as many as 14 points in the first half and 7 points at halftime. It has become a norm for them by playing a super first half before collapsing in the second. But it's the lesson a young team like this has to learn.

Taiwan NT finally went to business in the second half. Wu Tai-hao, Lin Chih-chieh and Yang Chin-min dominated inside and out and quickly turned the game around.