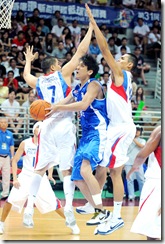 Taiwan Team A pulled off a thrilling 86-77 win over the Philippines at the Taipei County Sinjhuang Gymnasium on Sunday night to remain unbeaten at 2-0 in Jones Cup action.

The game quickly turned into a seesaw battle for the better part of the second half.

It was not until consecutive threes by Taiwan's Yang Jing-min and Tien Lei, with under four minutes remaining in the game, broke a tie at 72 to put the home team ahead for good.

Taiwan Team B lost to South Korea 101-93 loss earlier on Sunday to remain winless at 0-2.

Despite the score, it was a moral victory for the young home squad, which converted on 14 of 34 three-point attempts to rattle a South Korean lineup of mostly seasoned professional players in the Korean Basketball League.