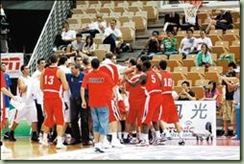 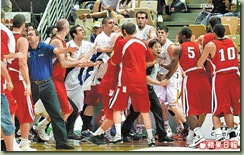 "The Asian Championship is a tournament that belongs to Asian players. But some countries have been naturalizing American imports to make their team stronger. The championship looks more like a pro game right now. Among them are Lebanon, Jordan and Qatar, " local media quoted Matic, who added that Qatar is the worse case that it barely has any local player on roster.

Asked by media about the issue, Jordan head coach Mario Palma was visibly angry. He said that Matic should focus on how to make Iran a better team instead of making false accusation on the import issue. Not all Iranian players are native, he said.

Jordanian guard Osama Daghles ran onto the court and punched Hadadai before a bench-clearing confrontation.

Taiwanese referee Chen Chuan-jen ruled that Hadadi and Abbas would be ejected as well as all players who left the bench area, which would have left both team with four players each.

However, Korean referee Kim Young-woo insisted that it was only an unsportsmanlike foul and overruled Chen. Kim decided that it would be four technical fouls for Hadadi, Abbas and bench of both teams.

The call pissed off Mario Palma, who told Kim that if Hadadi stayed in the game, Jordan would not resume play. Kim rejected the request and Palma ordered his player leave the court in a boycott.

The official score of the game was Iran 20, Jordan zero. 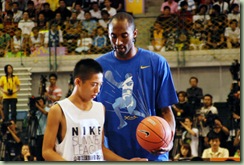 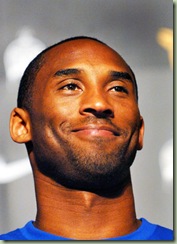