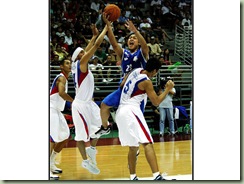 Taiwan shot the lights out in the first half by making 11 three-pointers for a 53-38 halftime lead. But it nearly wasted its 19-point advantage after Philippines rallied in the second half.

Philippines closed the gap with a 12-0 run in the third quarter which made the score 65-62. Taiwan panicked while Philippines kept on pushing. A dunk by Japeth Aguilar even put Philippines in front 68-66 with 6:47 left.

The score was tied at 72 after Kerby Raymundo's freethrows with 3:30 to go. The tension finally awakened the home team. Tien Lei, Lee Fong-yong and Yang Chin-min made consecutive jumpers in a 14-2 run that put the game away.

"I didn't expect it, " Taiwan head coach Chung Kwang-suk spoke about the hot-shooting in the first half. "However, we always had a messy second half."

"We had a chance to win after being down by 19, " said Philippines head coach Joseller Guiao. Guiao also said the officiating was quite different from the PBA as Philippines was whistled for traveling a number of times.

Tsai Chun-min, who led Taiwan 2nd NT with 22 points and 20 boards, had 12 points in the first half as Taiwan 2nd NT surprised everyone with a 54-49 halftime lead.

Korea quickly regrouped in the second half and took the lead back although Taiwan 2nd stayed close. 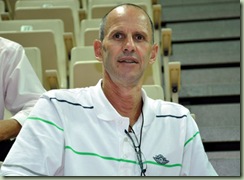