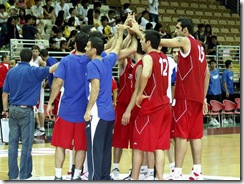 Iran rallied in the final 10 minutes behind Nikkah Bahrami's red-hot shooting to beat Lebanon 81-70 Friday in a rematch of the 2007 Asian Championship final and the most anticipated game of the day.

Bahrami had 29 points, including five 3-pointers, and 8 rebounds in the game. He had 13 points in the game-deciding 18-6 run in the 4th quarter.

The game is full of championship atmosphere not only because this is the rematch of the 2007 Asian Championship final but also because of the presence of three current/former NBA players -- Iran's Hamed Hadadi and Lebanon's Jackson Vroman and Matt Freiji, who did not join the team until today.

The dual of Hadadi and Vroman ended early with Hadadi and Vroman both fouling out. All three played well though. Hadadi had 8 points, 5 boards and four blocks while Vroman had 23 points. Freiji also chipped in 12 points in limited playing time.

Lebanon controlled the tempo early to jump in front, leading by as many as 11 in the first half. It still led by nine, 54-45, in the end of the 3rd quarter.

However, Iran made its outside shots at the time when it mattered most. Four consecutive threes changed the momentum of the game as Iran took the lead, 60-59, with 7 minutes left in the game.

All of a sudden, Lebanon looked lost on the court in the final five minutes, missing shots time and time again. Bahrami made his 5th three in the game with about one minute left to give Iran a comfortable 73-68 lead.

Lebanon was still in the game before Rony Fahed was whistled for a traveling violation with 45 seconds left. All they could do after the fatal turnover was fouling Iranians. 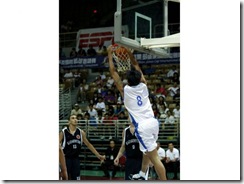 Reigning SBL Most Valuable Player Chang Chih-feng scored 18 of his game-high 28 points in the second half as Taiwan rallied in the final quarter and beat Kazakhstan 85-78, snapping its two-game losing streak and taking its record back to 4-2.

The game was tied at 37 all at the half. After a see-sawing first three quarters, Taiwan finally put the game away with a late 9-2 run to boost a six-point lead to a 13-point advantage. Chang had 14 points in the final period.

To counter Kazakhstan's height, Taiwan sent a pair of 6-8 centers on the court at the same time and they did not disappoint. Tseng Wen-ting and Wu Tai-hao each had 13 points with Tseng also dishing out 7 assists.

Lin Chih-chieh also scored 13 points for Taiwan. Taiwan's 19 turnovers was the main reason why they didn't shake off the 8-man Kazakhstan until the final quarter.

Alexandr Tyutyunik made all three 3PT attempts and had 15 points in the first half. Kazakhstan is now 1-6 and ranks last in the tournament.