Taiwan gets a sweet revenge in beating Japan 70-58 in the semifinal Wednesday and is scheduled to meet Korea's Shinhan Bank for women's gold of the 2009 William Jones Cup tournament.

Taiwan lost to Japan by one in the preliminary round after missing a pair of crucial free-throws with six seconds left. Before the rematch, Taiwan assistant coach Wang Ling vowed to beat Japan by 15 points.

In the first meeting Taiwan was left with only seven players due to injury. Five players were added from the World University NT to the roster Wednesday night.

Veteran center Cheng Hui-yun was the key man tonight. She played through injury and had 8 points, 6 rebounds, 4 assists and 4 blocks in less than 19 minutes.

Lee Wan-ting and Lin Chi-wen paced Taiwan with 12 points apiece. Lan Jui-yu had 11. Taiwan led 39-22 at halftime and led by as many as 20 points in the second half before Japan closed the gap.

Yoshie Sakurada had 22 points and Ryoko Utsumi had 20 for Japan.

Korea beat Malaysia 84-65 to stay undefeated in the tournament. Kim Youn-joo scored a team-high 14 points, including three threes, to go with 7 rebounds and 4 assists.

Teo Woon-yuen led Malaysia with 14 points and R. Kalamathi had 13 and 8. 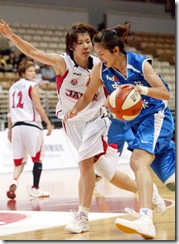