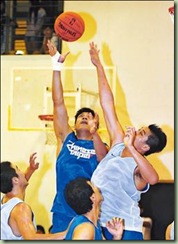 Led by Jet Chang's game-high 23 points, Taiwan second NT beat Taiwan NT 105-92 in the second warmup game of the three-game series, which was held for the preparation for the 2009 William Jones Cup.

The 2009 Jones Cup men's group will be played from July 18-26 in Taipei with nine teams participating. Most teams will use this annual tourney as the final tune-up before the Tianjin Asian Championship in August.

Taiwan NT head coach Chung kwang-suk told reporters after the game that he was not happy with the team's sloppy defense and rebounding.

Injured centers Tseng Wen-ting and Wu Tai-hao both watched the game at courtside. Tseng and Wu are still under rehab and expected to sit out the Jones Cup.

SBL MVP Chang Chih-feng returned from injury but was a little bit rusty. Chang said he still needs some time to work himself back in shape.